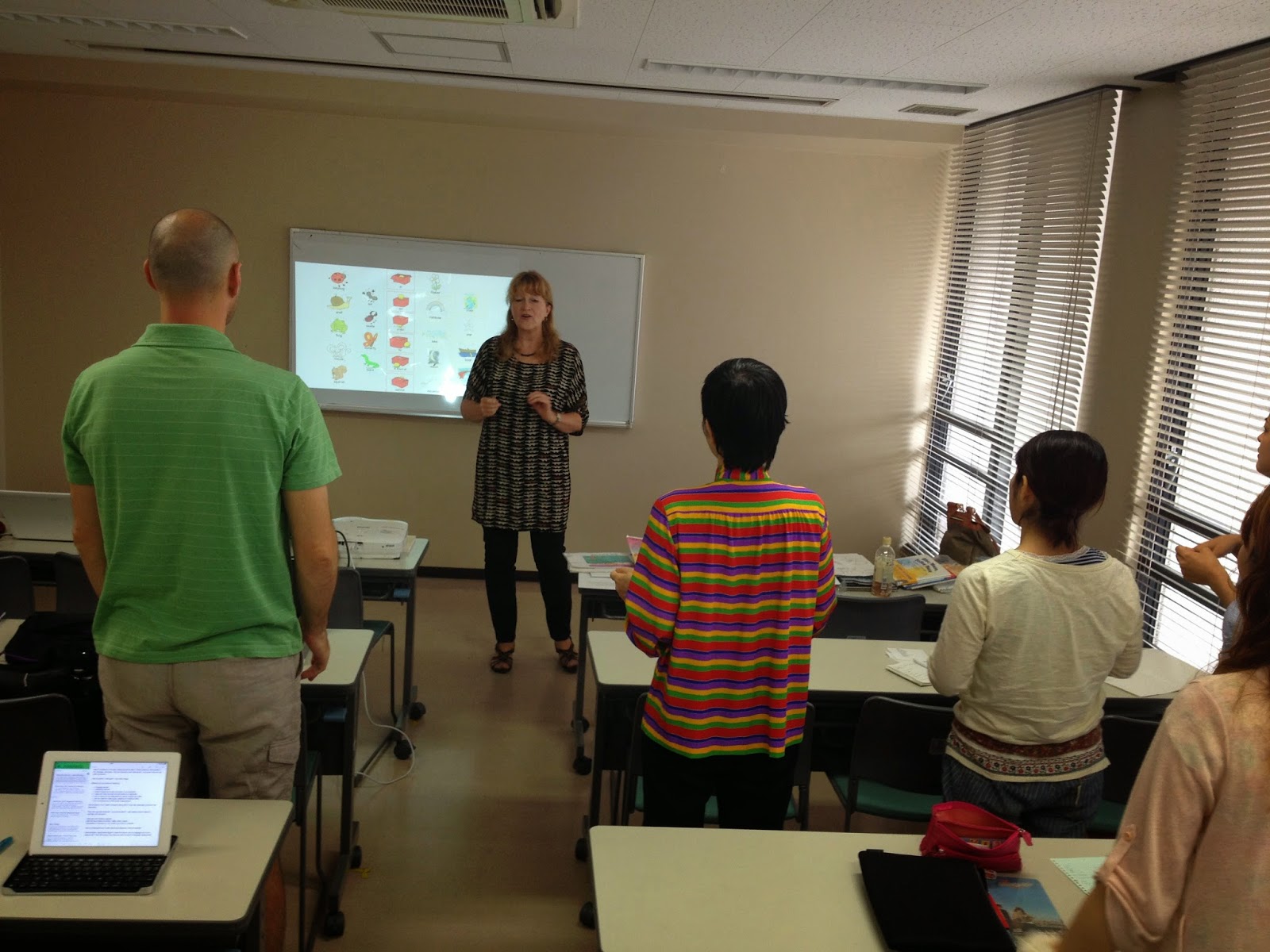 In her first visit to Nagasaki, Patricia Daly Oe gave us an excellent lecture on using picture books in the classroom. She's been in Japan for 27 years and has been teaching all of that time. From about 15 years ago, she started making picture stories for her students since the available materials in English were somewhat limited during that time. As a result, she started making her own stories and in the end some of them ended up getting published.

Here are some quotes she got us warmed up with: 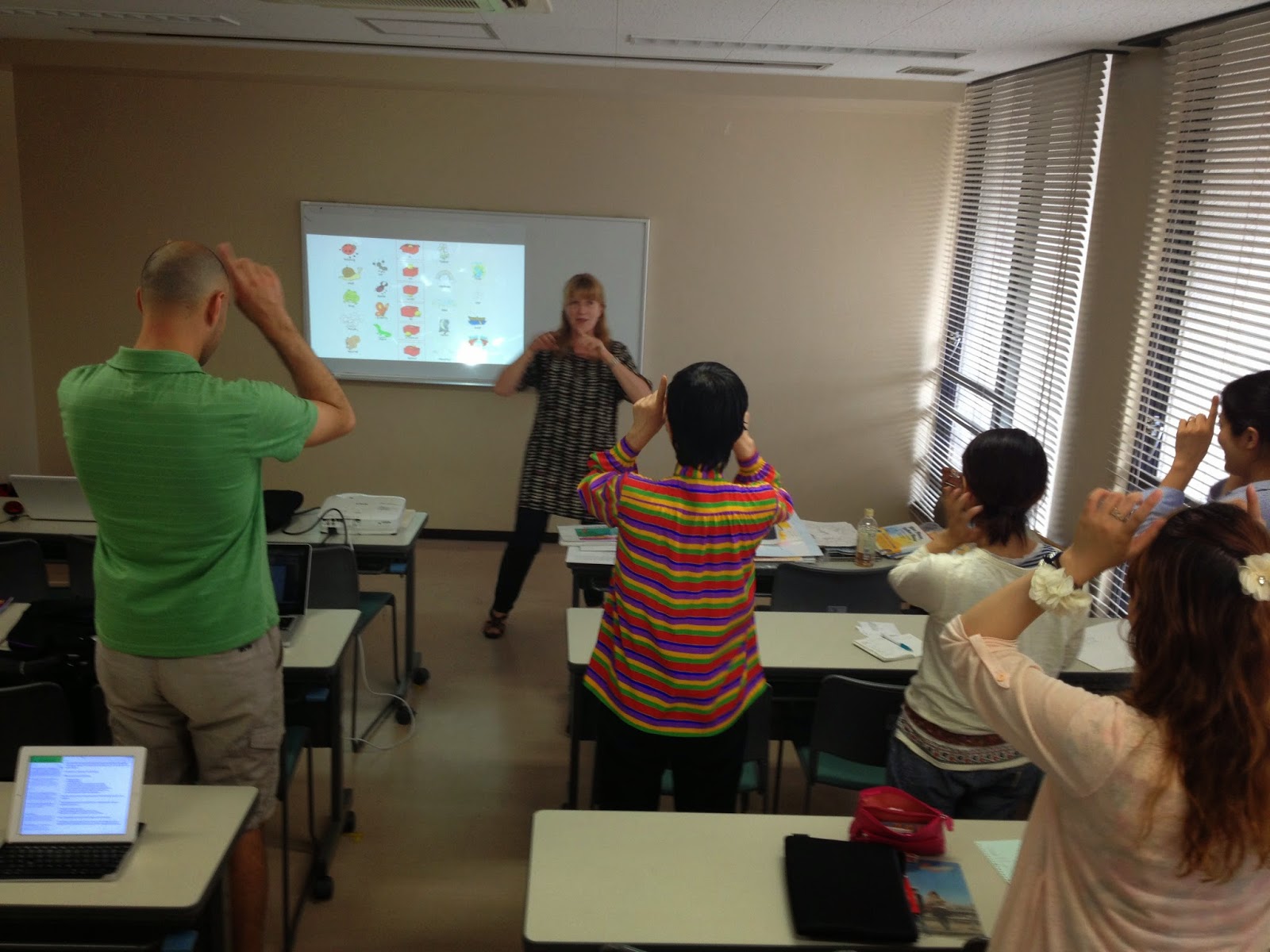 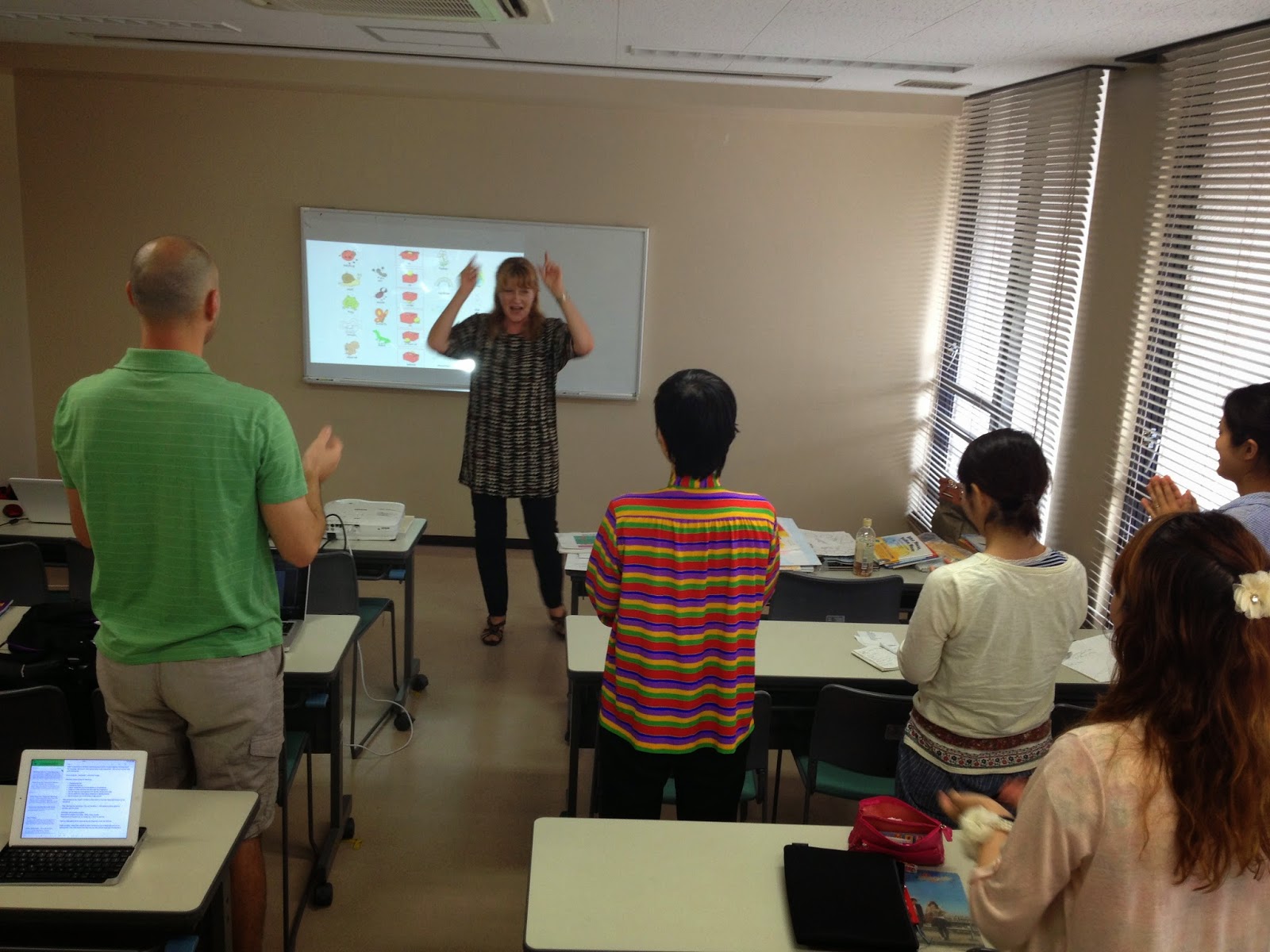 As a perfect example of the power of storytelling to the human mind, she gave us a challenge of trying to memorize 12 words on a page. Given only a minute, only one of our group of 14 was able to recall over 10 words. However, repeating the activity a second time with a new list of words and being told to "imagine the words in a fairy tale story," all save one of our group reported a higher number of words recalled. 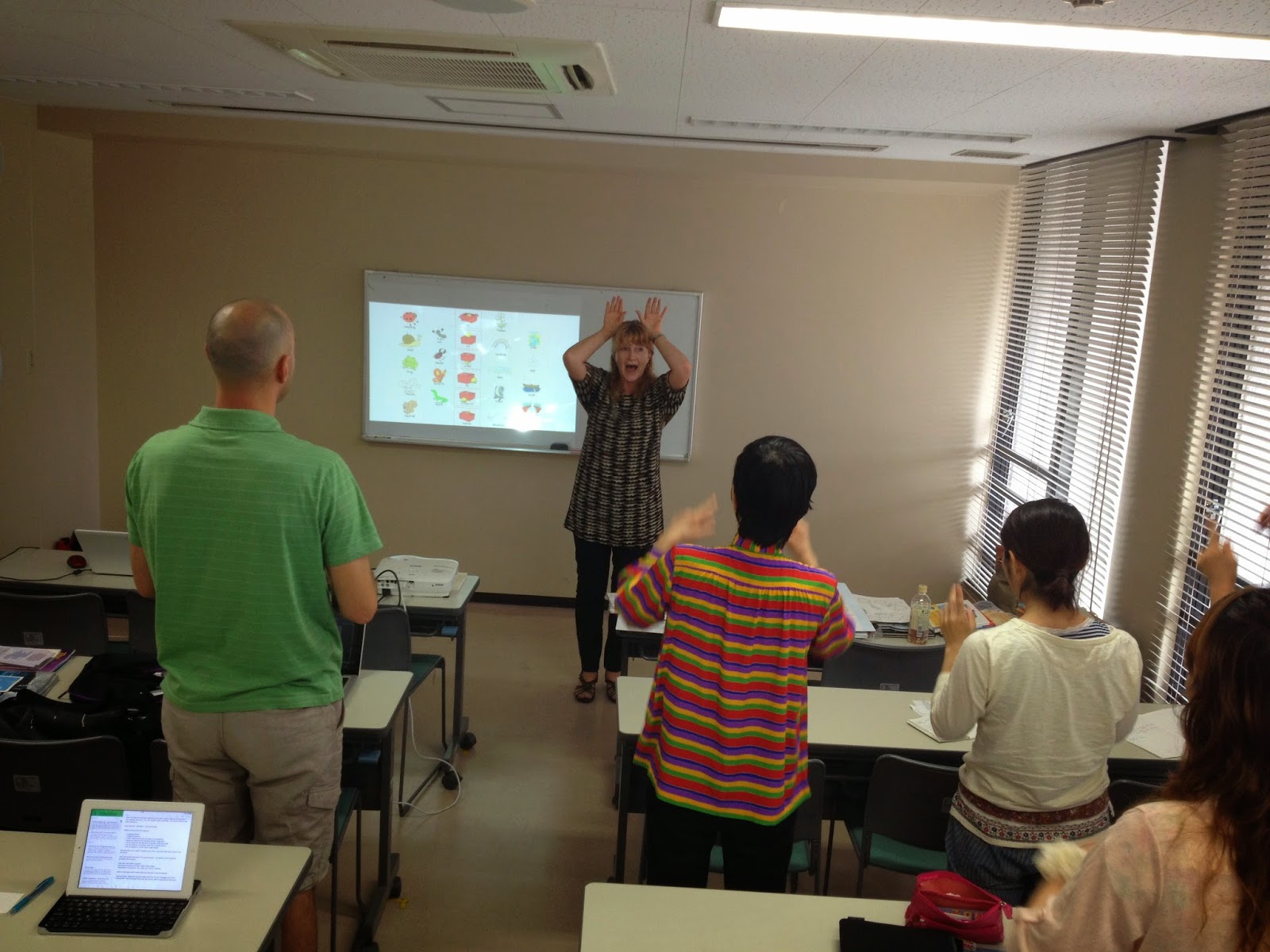 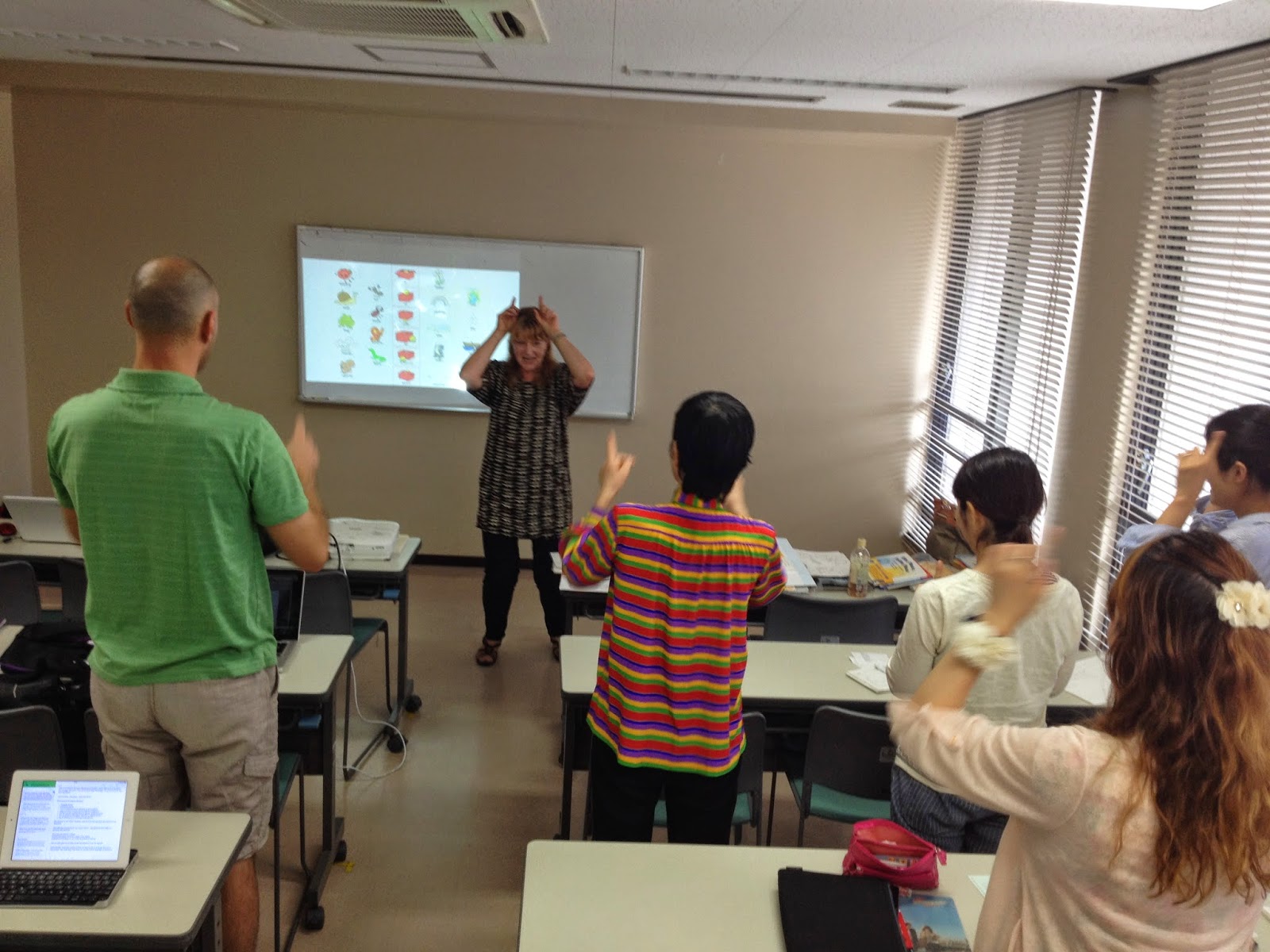 Here are some different ways to use books for different ages: (aside from reading alone) 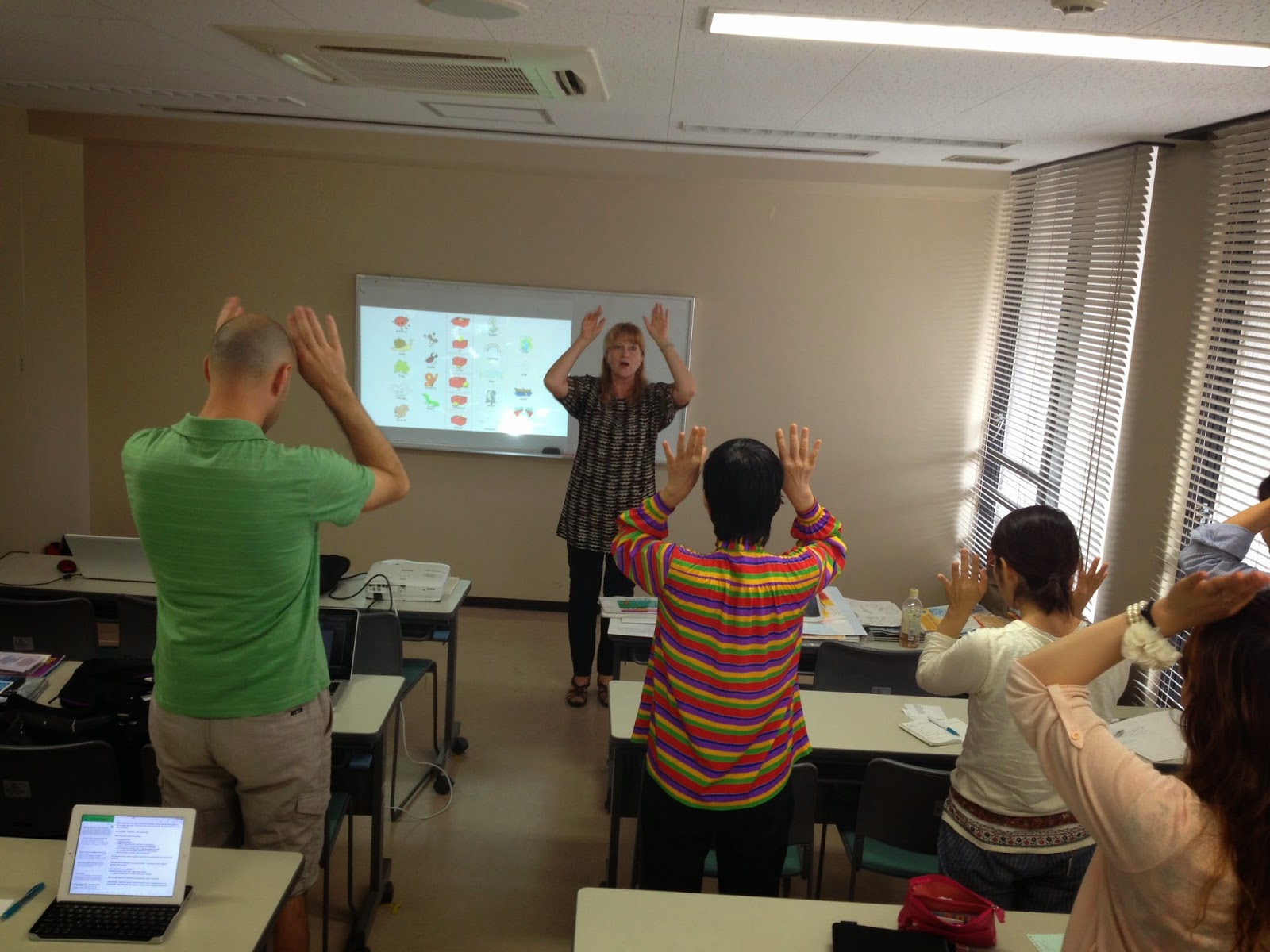 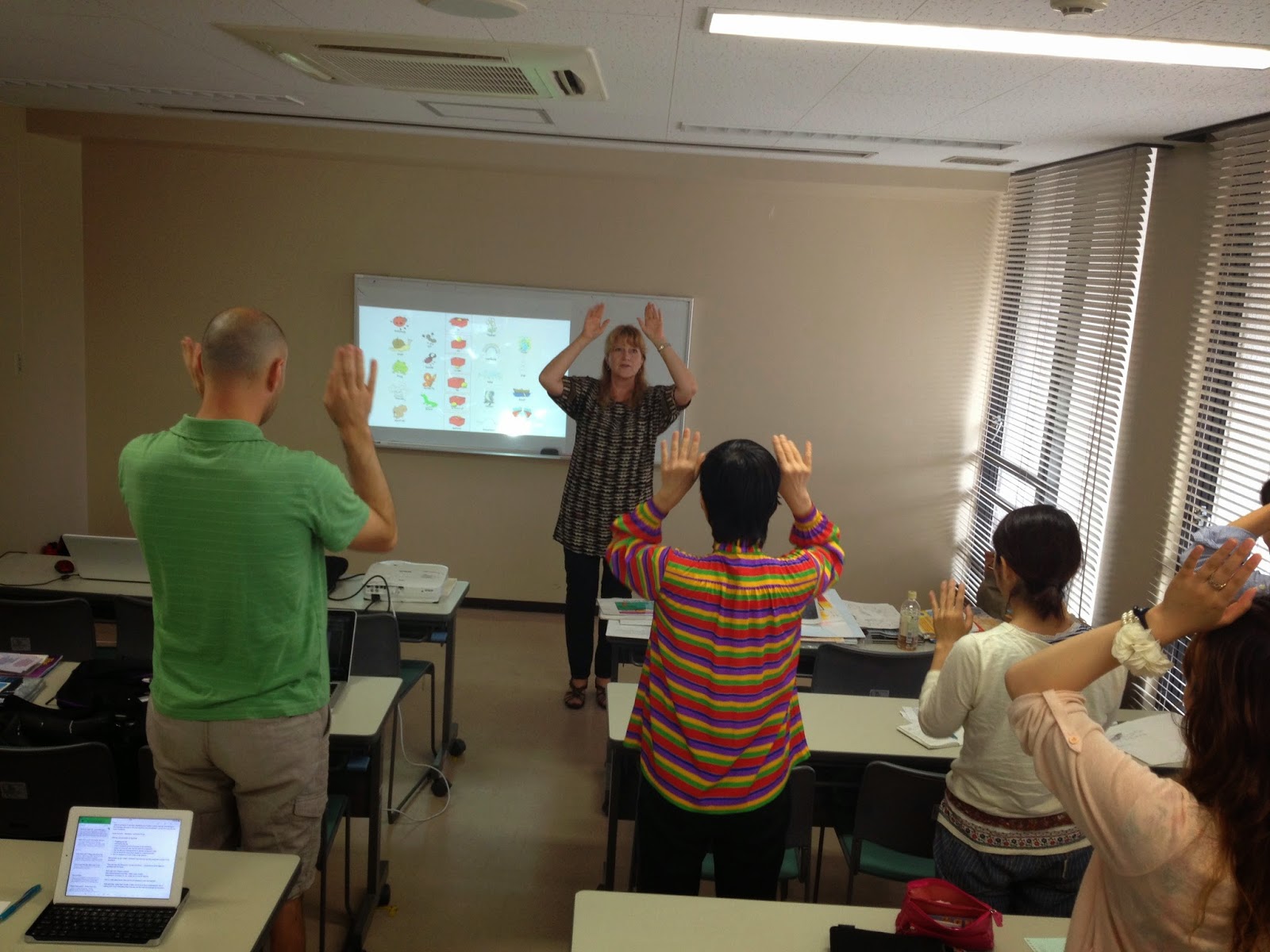 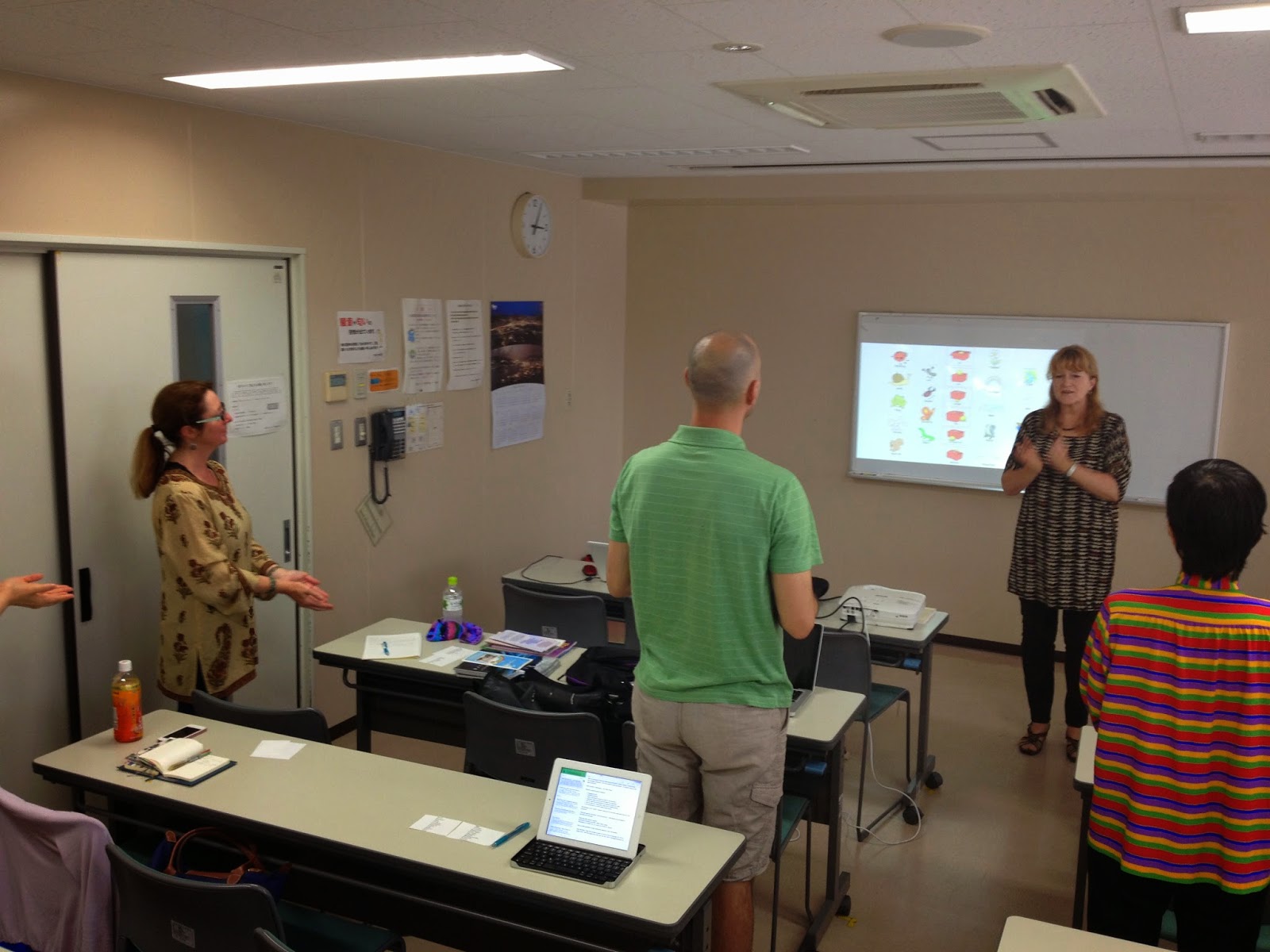 She showed us her "washi" (mulberry tree ink dyed paper forms) which is the technique she used to make each picture in her storybook. Despite claiming not to be an artist at all, she had some pretty amazing paintings. 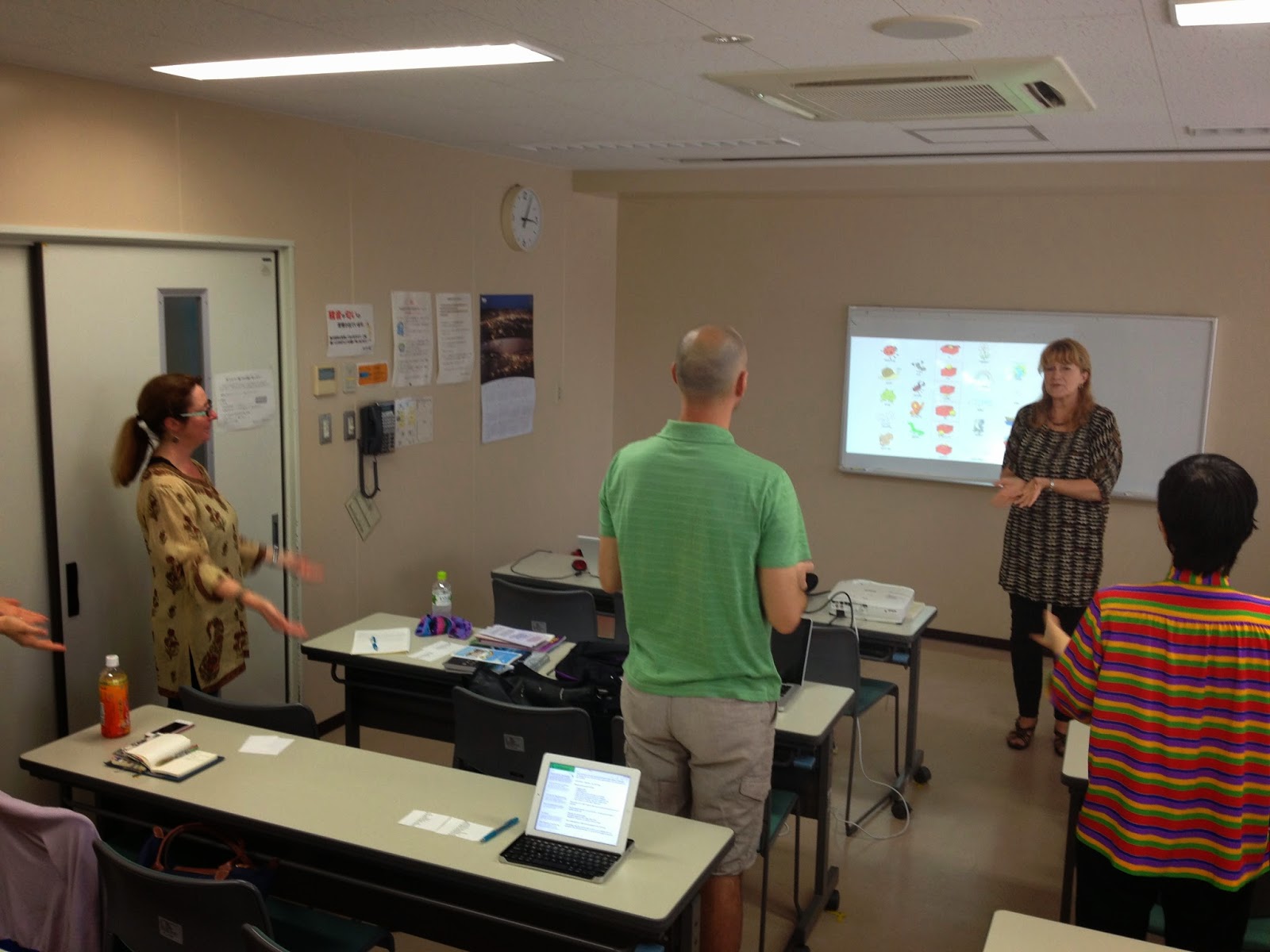 During the course of her lecture, she read us a couple storybooks in order to give us ideas for how to make use of them in our own classroom. Aside from being completely captivating, it was really enjoyable to be a listener to her storytelling style. In particular, the storybook "Lily and the Moon" was really fun and after listening she asked us some ideas for activities with the book.

Some of our ideas:
Another hands-on activity made us move around the classroom and communicate only using gestures. For example, making a gesture for an animal and a place where the animal would be and having our partners guess the answer (e.g. elephant under the blanket, butterfly on the flower)


Some advice she imparted for craft activities with the children - keep them simple to allow the focus to be on language and not on making stuff. Then think about how they can use the craft they will be making for language development.

She then demonstrated a song she wrote for the book (Lily and the Moon) which helps solidify the vocabulary using gestures and repeated phrases. After singing the song, she had us then make use of the grammar point we were given to interview our classmates:

"Have you ever seen..." ask your classmates about something they have seen. For example, "have you ever seen a shooting star?" The recipient answers the question and then proceeds to "pass on" the question in a different form to the next person in the class until all members have a chance to speak.

In the second part of the lecture, Patricia gave us some ideas for storybooks for advanced learners - college level and upwards. She chose for her demonstration "The Sound of Colors - A Journey of the Imagination" by Jimmy Llao from Taiwan. Before reading the story, she asked us to reflect on these following questions:

Once her reading was complete, we broke into a group discussion on what we each thought the story was about. Given any number of interpretations, she never once voted down a response. All interpretations were acceptable thus the lesson of it being up to the reader to decide.

She also showed us a Japanese kamishibai which she translated to English. "The Samurai Story" which is one example of having students memorize and perform a story for other fellow students. The theme of having a comedy or having a punchline in the story was part of the learning in this example.